This week is an easy week.  We are working in 30 minute sessions that are two hours apart.

Most of our work is going to be friendly work with a light bit of yo-yo game (just a few steps) thrown in to keep us from boring our friendly selves to death.

She is working really well with handling.  She still flinches, but it isn’t a full-body flinch anymore.  Now it is just from her hindquarters and withers through her legs.  She has stopped the ramping and stomping feet while you are working with her, but she will still ramp and stomp a bit in her stall.

I like working with her in the barn (it is CRAZY cold in Wisconsin right now) because she can’t rear up on me.  The ceilings aren’t quite high enough.

I took her out twice on the driveway, a 40 yard stretch of blacktop, and then once out on the track.

She does well on the pavement – there is nothing to distract her.  She did well out on the track, too.  It was snowing pretty hard but she plowed through it and we did well.  She took my lead and didn’t pull or lag.  It was really nice.

Next week we are going to be moving on to bigger and a little more challenging things, but I figure if I just keep it slow, steady, and predictable then we are in good shape. 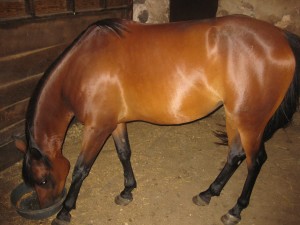