A client of mine asked me recently if I could use a saddle.

Her horse had died recently and she wasn’t using it anymore.

Imagine my surprise when she walks into my workroom carrying a beautiful Stübben all-purpose saddle with the pads!

It is an older version of this!

So now we have a good saddle to work with, and because it is a little deeper of a seat, I will have just a bit more stability than the higher Western saddle I’ve been messing with. I like the horn and seat of a Western saddle better, but the stability through the fenders is nice on an English saddle.

What I really want is someone to make me a custom design*.

Until then, I’m going to have to settle (and what a delightful compromise it is!) for the Stübben.

*What I would like to find is a deep but short-backed McClellan saddle with a bit of a higher pommel and cantle with fenders like a cross-country English. Kind of a combination of a jumping English saddle and a McClellan with a full seat that has a saddlehorn (or four).

Friendly Game, Back to Basics

I am not thinking of this as a setback, but we still have a lot to work on here.

I got to the farm and talked to Cinda about last week.  She had warned me about setbacks when we started, but I don’t think this is a setback, really.
I think that there are some higher trust issues that Kameo and I need to work out before we can move on.  She trusted me enough to work through the initial things, but now that we are moving on to higher level stuff, I am going to have to prove myself again.

Thursday started with some fitful grooming.  We worked on legs and feet, but she didn’t offer up her feet like she did last time.

I could chalk it up to her still being in heat, but that would put all of the responsibility on biology and not enough on my ability to communicate with her.

After I groomed her and played around in the barn a bit, I took the lead off and just let her hang out in the barn with me and one of the geldings.  She was wearing a halter and light cinch, along with a light saddle blanket that came with the new English saddle I got the other day (more about that in another post…) and just kind of moseyed around. 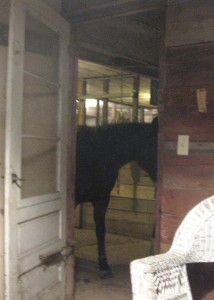 She hangs out right outside the door and watches. It is a little spooky.

I thought when I released her into the pasture she would kick and run like she did last week, but she played it cool and just walked over to the others.  So at least the setback seems to be of the “Can I trust you?” variety and not the “Take this, Jerk!” variety.  After last week, I’ll take it.

The barn office hadn’t been used for a while, so I spent some time cleaning it while the horse raided the haystall and then I started working on a few designs I need to have done by the end of the month. 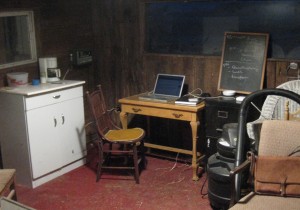 This has become my office & design center.

So I was all set up for Friday.  I had the computer, a desk, and my pencils, sketchbook, and a coffee pot I brought from the city  in the office.  I figured I would play in the barn all day on Friday – the weather is so nice I couldn’t do otherwise.

Friday started at 7.  I got up, threw hay, then went inside to eat.  I planned on working in the round pen.  I cleaned off all of the ice and snow Thursday in my downtime and got it ready to use.  I don’t want her to lose her footing and create a problem.

As it turned out, clearing the roundpen was a bit of prep for next week.

See, it turns out that we have had some problems I need to figure out.  Either she is unsure of me because I am green (a polite way of saying that I don’t know what I’m doing) and confusing her, she is trying to assert her dominance, or she is still scared.

When I brought her in Friday morning, she was fine.  She wouldn’t take a halter in the pasture, but instead walked up to the barn door when I tried to halter her.  She then stood at the barn door waiting for me and then calmly walked in when I opened it.  That’s weird, I thought.

So we did our grooming and friendly stuff, but she was still edgy.  I brought in a couple of different horses throughout the day to see how she would interact with them and who would make her more comfortable.  We got haltered and did some work, then I let her back out.
The second time I went out to the pasture, I called her by name and she walked up behind all the others – the head mares were right at the door.  When I shooed them away, she stood there as I held the door and hesitated, then walked through the door on her own with some hesitation as the head mares stood close.  That was nice, but I can’t figure out what it means.  I am thinking that she is comfortable taking direction from me but still worried about her place in the herd and the biting, nasty things the head mares do to her when she gets really confident with them.

In any case, she took the halter once we were inside and we did some lead-work and yo-yo, then lots of friendly and grooming.  She is weird about her feet and legs, not like last week where she gave them to me freely.   I incorporated the simple cinch and saddle pad that came with the Stübben saddle a client gave me into the friendly stuff and then we backed into and out of doors and the stall again, and then I let her be for about 45 minutes just wandering around the barn while I worked. 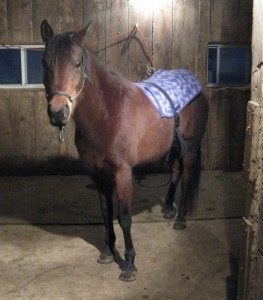 She was actually pretty good with the cinch and saddle pad.

When Cinda came out to the barn in the late afternoon, we brought out some traffic cones and tried some work in the driveway.  She is really resisting my lead outside, and then when I tried to do a bit of driving and circling, she lost all interest – pulling me any which way.  I haven’t mastered the lead rope and carrot stick in my hands and so I was confusing her terribly.  When Cinda took over and showed me how it was done, her ears perked up and she was fine.

So that is where we are for the time being.  She is iffy about me.  Not as bite-y as she has been, but it is still there and I am going to need to get really good with the next few challenges.  I have to prove I know it better than she does.

An odd thing happened when I threw hay the last morning before leaving to catch the train back to Chicago.  I threw the bale in flakes for everyone and then when I walked up to her, she pinned her ears, brayed, and took off to another flake across the pasture with a kick.  This is something that I haven’t had her do before.  It is an interesting puzzle piece.  She usually gives that exact same reaction to the head mares when they come over to eat on the flake she is eating.  I have seen it a number of times.  I am left wondering if she gave the grunt-kick-switch because she saw me as one of the alphas or because she was showing me just how done with me she was for the week.

And here is where the carefully planned out schedule I mentioned in the Goals & Process post breaks down.  I am going to have to drill handling the rope and stick this week before I get to the farm.

I am also going to have to figure out exactly where I stand with her and try to work from there.

Cinda’s interpretation is that I am green and need to be more adept with the aids because I am confusing and boring her. I would add to that that I feel like I am still in an unsure place with her and have to do a little more proving myself to her as a leader as well as stop boring and confusing her.

So that is where we leave it for the week.  I am not too down about it, but after the 4th and 5th week it is hard not to be a little disappointed.

If you see me in the city with a rope and a long stick practicing and looking a little crazy and a lot eccentric, be nice to me.  I have a difficult mare I have to prove myself to.